November 05, 2012
Vivi loves Obama.  It all started during the 2008 election when her dad and I talked at great length about politics.  We were so happy to see George W. Bush go that I think our enthusiasm was contagious.  She obviously didn't know anything about the implications of one winner versus another but she decided early on that Obama was her "new best friend."  She was only two then but when my husband came home with this "Obama nightgown" she was delighted. 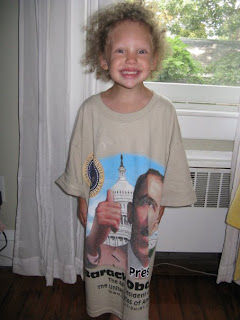 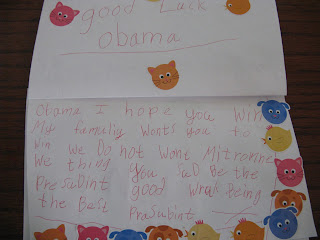 This is the main page but there are a few others with "You Rock Obama" surrounded by even more stickers and a page with Vivi's stats and address so Obama can write her back. We included the picture below and she sent it off. 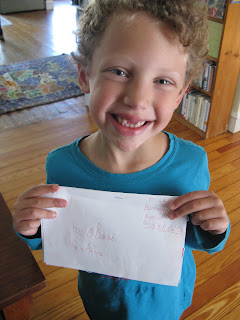 My six-year old certainly picks up on our feelings about the election and our strong distaste for Mitt Romney but she is pretty good at deciding what is important to her.  When my husband I were discussing Romney's declaration that he would cut all federal funding for PBS, Vivi angrily declared, "I think Mitt Romney hates kids!"

I am just glad that she isn't old enough to understand what he meant by his 47% comment.
Politics Vivi

November 15, 2012
My girls spend a lot of time together.  Jude and Elie are inseparable for all the reasons associated with young twins and, apart from when she is in school, Vivi is home with them.  Vivi will often try to engage her sisters in her games which generally consist of bossing J&E around in the name of playing "school" or "dance class" or "summer camp." The problem is that Jude and Elie drive Vivi crazy.  They don't listen.  They don't follow her directions and even worse, they are full of their own ideas.  Oh, and sometimes they just. won't. stop. touching. her. stuff.  The few harmonious moments of sibling love quickly spiral into a three-way battle for control. I've tried to talk with Vivi about some of the ways that she can deal with her sisters.  Her first step is what we have called the counter-offensive.  She put this sign on her door: JUDE OR ELIYA CAN'T COME IN!!!!! This is Aviva's room.  Onle [only] mom and dad c
Read more

November 13, 2012
Well, I didn't make my goal of blogging every day this month but at least I had a good reason-- pinworms. Internet, that may be the only time I use the word good and pinworms in the same sentence. My house is proof that it makes no difference how neat and tidy you are, sometimes kids catch some pretty undesirable stuff.  After dealing with head lice and pinworms in the span of six weeks, I can attest to just how undesirable those things are. By the way, undesirable is a nice way of saying really, freaking gross. After wiping Elie's bum and discovering that she had worms, I did what any caring mother would do. I sat down and cried at my bad luck.  Yes, because it is always about the mother.    When I told Elie that worms were the reason she had such a sore bummie, she said in a very concerned voice, "Oh no. This is such bad news.  I hope my sister Jude doesn't get the wormies." And like most twins, they shared that too.
Read more

I opened the New York Times homepage this morning and saw photos of people standing in line in the dark to vote in make-shift tents that had no heat.  Those pictures really moved me because I've lived in a country where people aren't allowed to vote; a country where people are at the mercy of their own dictator.  Voting means so much to so many people around the world and it is a privilege many Americans take for granted. There is all this talk of voter fraud but let's be realistic about what's happening in this country.  People aren't scamming the system to vote.  Please.  I believe "voter fraud" is a euphemism for targeted voter disenfranchisement.  When people vote despite a multitude of obstacles, it sends a message that this right is important. I voted today and like last time, I took my six-year-old with me.  She has learned so much about politics during this election that I wanted her to know that voting is her way to do something about the issu
Read more