Showing posts from March, 2010
Show all

March 24, 2010
After a pretty awful night of babies getting up every hour, I was certain today would be better.  The Turtles are still miserable with a nasty, nasty cold but I knew that they would probably get some good naps in today.  Except that they haven't really.  Of course, the little sleep that has come has not come at the same time for both Turtles. Then, alas, the rain stopped and the sun finally came out.  So we went outside for a walk.  It was cold.  My thermometer misled me and damn it, if we didn't all get a chill.  I've been wrapped up in a scarf ever since. It's not even 2:00 and I've already hit the low-point of the day.  Since Vivi had an accident and was smelling of eau de pee pee and I was still sporting the post-vomit stink that befell me when Jude puked down my shirt in the middle of the night, I decided to let her shower with me.  I'm nothing if not efficient.  Unfortunately, that was when it happened.  The dreaded comment that only an innocent, yet obs
2 comments
Read more

March 22, 2010
I'm not joking when I say that one of Vivi's earliest words was privacy.  Or, as she said it,  pri-a-see .  I first discovered that she knew the word when she kept repeating it while pulling on the sun shade of her stroller.  When I got the message and finally pulled it down she quickly relaxed into sleep.  Thus began her frequent demands for  pri-a-see, both in the stroller and while on the potty.   So it is no surprise, as she nears the age of four, that having her privacy is still of utmost importance.  Her bedroom is now officially a "turtle-free zone" and it is not uncommon to find that she has locked the door while she is in the bathroom.  I'm fine with this.  There's nothing in our tiny bathroom that could hurt her and I can absolutely identify with wanting a quiet place free of interruption, even if it is just for a couple of minutes. Lately though, her privacy demands are mostly because she doesn't want anyone to see her "business."  T
1 comment
Read more

March 15, 2010
I live in a small community in a small city in a really small state.  I grew up in Vermont and while I could appreciate the beauty of the place, I often felt stifled by its provinciality.  As a result, I decided to go to college 600 miles from home and travel the world upon graduation.  When I returned to the United States a year and a half later, I moved to Boston.  The big city suited me and I was downright miserable when marriage called me to Providence.  At the time, it made sense for me to make the move instead of my husband but I still resented that ALL my friends lived someplace else.  It was hard going from having a really active social life to having my husband be my only available friend.    Motherhood changed all that.  Not only was Vivi a joy to be around but her very existance led to a blossoming social life for me.  I met other mothers at libraries and parks, breastfeeding support groups and grocery stores.  This is the beauty of living in a small community in a small ci
3 comments
Read more 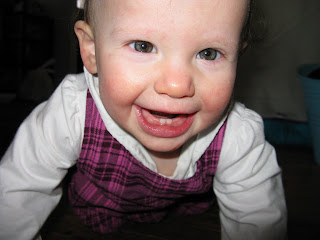 March 03, 2010
I think most parents would agree that each passing stage of their child's life is bittersweet.  While it is exciting to see how our children change and grow, every new development often reflects a loss of something else.  As my Turtles turn one, I feel this in a very profound way.  In what has been the fastest year of my life, I look toward their birthday with a great sadness that is only mildly offset by relief.  This may be a common feeling for mothers of multiples but it doesn't make it any easier. Jude Bug and Ellie Bean have brought me great joy this past year but I would be dishonest if I didn't acknowledge that the joy was deeply mitigated by the fact that I spent the vast majority of our time purely focused on our survival.  There was never any time to focus on tiny fingers wrapped around my own.  There was hardly a moment when I could marvel at the miracle of two full-term, full-sized babies my husband and I created.  I never once felt like I could bury my face in
5 comments
Read more

March 02, 2010
Saturday night Vivi got to have her second sleepover with her friend G.  Lovely Mama invited her to stay knowing that Vivi loves nothing more than being able to sleep at someone else's house.  I don't know if it is just a big girl thing or just wanting a solid block of time to rest without being woken up by a Turtle.  Either way, she could hardly contain her excitement at getting out of the house. According to Lovely Mama, Vivi and G had a great time with no more than their usual sibling-like bickering.  They had ravioli, made popsicles, and finished the evening off by watching Mary Poppins.  Vivi was semi-comatose and drooling on the couch cushion by the time the movie ended so Lovely Mama put both kids to bed in the same room.  Everything was going smoothly. Well, until, the talking began in the bedroom.  Talking and talking and talking....  Lovely Mama went in three or four times to settle G to sleep.  After nearly an hour or so, he walked out of the bedroom and had this c
Post a Comment
Read more
More posts