Showing posts from December, 2010
Show all

December 31, 2010
I think I need another blizzard to get back into my mommy zen mode.  School vacation combined with my twin tornadoes and my somewhat crippling desire to maintain some semblance of order in this house has left me feeling all cranky and burned out. Jude and Ellie are delightful but they can rip the books off the shelves, empty the kitchen cupboards, and strew every single toy inside these four walls with remarkable speed and determination.  No sooner have I replaced all my books when I hear the crash of CDs out of a cabinet they recently learned to open.  There are only so many high spaces in this house and we've maximized what we have. So, in this frame of mind, I turned to my husband the other night and said, "Is it possible to adore your children beyond measure but hate your life?"  In his very psychiatrist way of being, he asked if the clean-up was getting me down.  Indeed, it is. I recognize that while I *should* work on letting the chaos go, I just can't right
4 comments
Read more

December 27, 2010
I love blizzards and we were hit with a big one last night.  After sunset, when the world was slowing and people were snug in their warm homes, I bundled up and headed out for a walk.  It was cold and windy and I was alone in my neighborhood.  There were no cars, no plows, and no noise other than the wind.   Houses were illuminated by the white lights within and the colored lights hanging from exterior eaves and railings.  It was lovely. After all the chaos of Christmas and travel, it was nice to be home.  I was happy that we arrived back before the brunt of the snow hit and the girls were none the worse for all the time in the car.  As I approached the house at the end of my blizzard walk, I got to see my house and my life from the outside.  Vivi was running around in her pajamas, Jude and Ellie were dancing, the new toys were scattered around the floor, and my husband was half paying attention to a muted football game on television.  From the silence of the street, I felt grateful t
Post a Comment
Read more 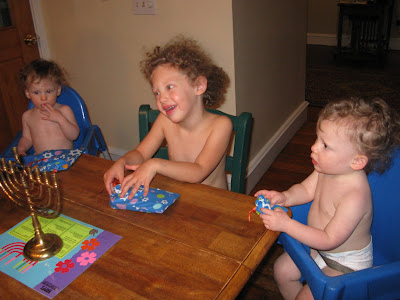 Well hello again bloggy blog friends!  It's been a long time.  I think I lost my blogging mojo sometime around Thanksgiving and I'm still not sure it has made it back.  (Sorry grandmas.)  It seems that I was cleaning up from Thanksgiving and then Hanukkah hit which shouldn't be a big deal but somehow turned into one and well, before long I was all in a tizzy about Christmas.  There you have it. We have had a lovely month so far.  Hanukkah was a hit not only because of the presents but because Vivi learned the candle blessing which she proudly recites in near-perfect Hebrew. (Which she calls Spanish.) In our house, Hanukkah apparently requires the removal of clothes. Once Hanukkah passed, we made our annual trek out to Big John Leyden's Tree Farm.  (Frankly, who wouldn't want to buy a tree from a guy named Big John?)  Finding the perfect tree was a riveting experience for everyone involved.  See, just look at Jude: Somehow we ended up in a field with mostly
2 comments
Read more
More posts