Running for the Hills

June 10, 2011
Hello Internet!  I am back from the abyss of home improvement, rainy days, my cleanse, various outings and disasters, as well as Vivi's last day of nursery school.  I survived it all and now we have this fancy thing on which I can relax: 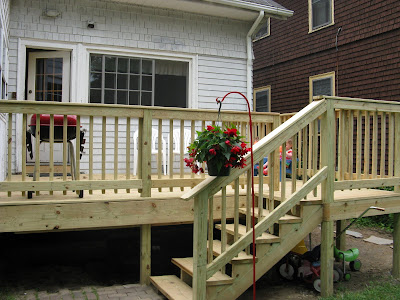 Of course, I am not the only one who uses our new deck.  How could you not spend a lot of time out there when you have a twin sister and conjoined adirondack chairs? 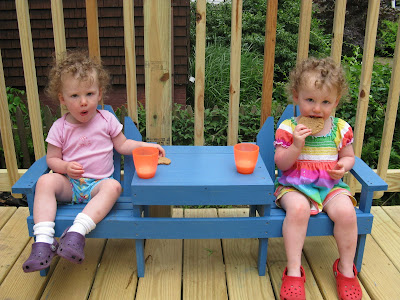 And snacks.  Must not forget the snacks.
It wasn't long after the deck was finished and the rain broke, that my husband decided we needed a little family outing.  So we drove to southern Rhode Island, slapped some numbers on our kids, enticed them with Pirate's Booty (or "Judy Moody" as Ellie calls it), and told them to run their little hearts out. 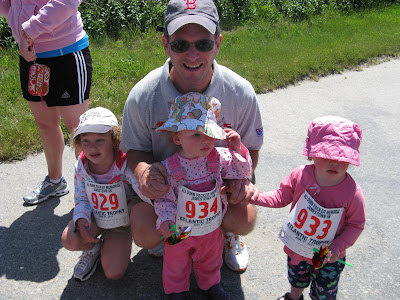 Which they did for a half mile.  Well, Jude and Vivi did.  Ellie stayed at the starting line with her snacks.  Are you sensing a theme here? 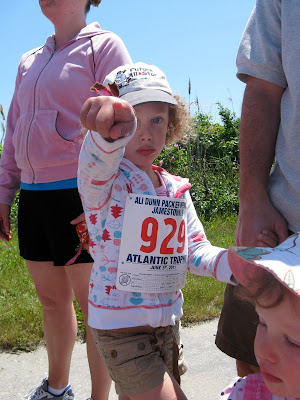 "I'm taking you down, Mama."
Vivi did great and finished in the middle of the pack.  Although she brought up the rear and face planted at the finish line, Jude was a rockstar two-year old runner! 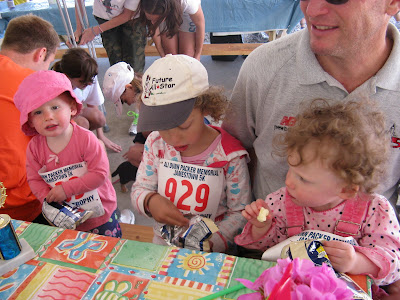 Bring on the Booty!  Jude and Vivi also got trophies which they both proudly carried around with them the whole next day.  I did the kiddie run with Jude but I didn't get a trophy.  What's up with that?
After all the racing hullabaloo, we had to face the fact that Vivi had one last day of nursery school. She was sad.  I was sad.  Jude and Ellie were delighted that there was an "ice cream potty" at the end of the school day.
This is Vivi on her first day of school in 2009: 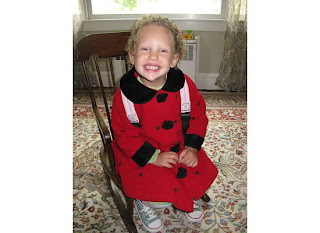 And this is her on Monday, her last day: 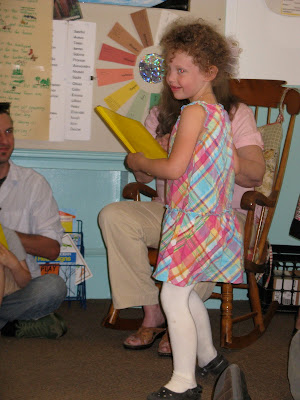 As promised, there was some celebratory ice cream. 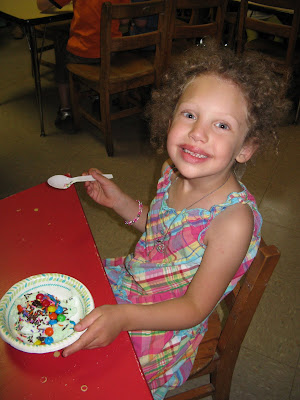 When I proudly exclaimed, "Hey Viv, school's out for summer!"  She looked at me and said, "Mom, I don't feel very good about that."
Of course, summer vacation couldn't begin without some serious celebration at home.  That's when this happened: 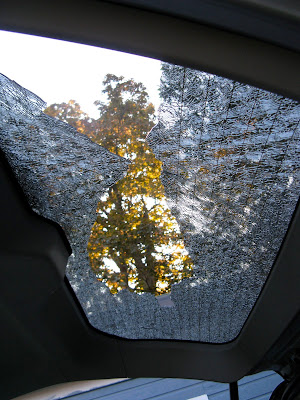 Who doesn't love a clear view of the trees from their minivan?  Well, that would be Vivi's parents. 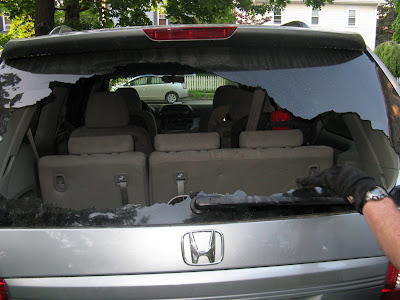 The story on how the window got broken is a bit cloudy.  There was some spinning involved (both physically with Vivi and probably the story too), a rock pile nearby, and a whole lot of tears.  I think I get a B for keeping my mama rage in check but we are now $250 poorer for the repair and we have a five year old on house arrest.
That's my story. What have you been up to, fair readers?
Linking up to Simply Modern Mom's Glimpse Into Motherhood.
Exercise Family project Project 52 School Vivi

November 15, 2012
My girls spend a lot of time together.  Jude and Elie are inseparable for all the reasons associated with young twins and, apart from when she is in school, Vivi is home with them.  Vivi will often try to engage her sisters in her games which generally consist of bossing J&E around in the name of playing "school" or "dance class" or "summer camp." The problem is that Jude and Elie drive Vivi crazy.  They don't listen.  They don't follow her directions and even worse, they are full of their own ideas.  Oh, and sometimes they just. won't. stop. touching. her. stuff.  The few harmonious moments of sibling love quickly spiral into a three-way battle for control. I've tried to talk with Vivi about some of the ways that she can deal with her sisters.  Her first step is what we have called the counter-offensive.  She put this sign on her door: JUDE OR ELIYA CAN'T COME IN!!!!! This is Aviva's room.  Onle [only] mom and dad c
Read more

I opened the New York Times homepage this morning and saw photos of people standing in line in the dark to vote in make-shift tents that had no heat.  Those pictures really moved me because I've lived in a country where people aren't allowed to vote; a country where people are at the mercy of their own dictator.  Voting means so much to so many people around the world and it is a privilege many Americans take for granted. There is all this talk of voter fraud but let's be realistic about what's happening in this country.  People aren't scamming the system to vote.  Please.  I believe "voter fraud" is a euphemism for targeted voter disenfranchisement.  When people vote despite a multitude of obstacles, it sends a message that this right is important. I voted today and like last time, I took my six-year-old with me.  She has learned so much about politics during this election that I wanted her to know that voting is her way to do something about the issu
Read more

November 13, 2012
Well, I didn't make my goal of blogging every day this month but at least I had a good reason-- pinworms. Internet, that may be the only time I use the word good and pinworms in the same sentence. My house is proof that it makes no difference how neat and tidy you are, sometimes kids catch some pretty undesirable stuff.  After dealing with head lice and pinworms in the span of six weeks, I can attest to just how undesirable those things are. By the way, undesirable is a nice way of saying really, freaking gross. After wiping Elie's bum and discovering that she had worms, I did what any caring mother would do. I sat down and cried at my bad luck.  Yes, because it is always about the mother.    When I told Elie that worms were the reason she had such a sore bummie, she said in a very concerned voice, "Oh no. This is such bad news.  I hope my sister Jude doesn't get the wormies." And like most twins, they shared that too.
Read more